A Lamp in the Dark - DVD 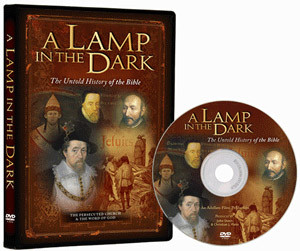 A Lamp in the Dark - DVD

A Lamp in the Dark - The Untold History of the Bible
An Adullam Films Production
Running time:  3 hours

A Lamp in the Dark is an exciting documentary that shows the intriguing history of the Bible.  Enter into a world of saints and martyrs battling against spies, assassins and wolves in sheep's clothing.

Through the Middle Ages, the popes and the Inquisition forbade biblical translation, threatening imprisonment and death to those who disobeyed.  Learn about the sacrifice of men like John Wycliffe, Martin Luther, William Tyndale, Myles Coverdale and others, who hazarded their lives to communicate the Bible in languages people could understand.

With the fall of Constantinople, ancient Greek manuscripts came into Europe, and with them, the "clear streams" of understanding that brought about the Protestant Reformation.  But what is little known is that Rome launched a Counter Reformation with the intent of destroying all the works of the Reformers.  Could this be a key to the "untold" history of the Bible?  And is it possible that this ancient war on the Word of God continues to this day?