The Men Behind the King James Version 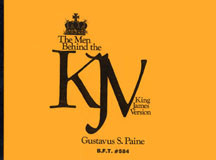 The Men Behind the King James Version

The Men Behind The King James Version

Who were the men engaged in the translation of the King James Bible? What were their individual talents and contributions? How did a committee manage to produce a literary masterpiece?

Now, at last, these fifty men, of varying religious persuasions and literary talents, have found their biographer. It can now be said that we know more about them, as individuals and as a working qroup. than we know of their contemporary, Shakespeare. Through the author's discovery of the Bois notes, made by one of the editors and never before discussed, we see how the committee worked as it drew near the final draft. Only in this book will you make the acquaintance of all the major contributors to the KJV: Puritans John Rainolds and Laurence Chaderton: Miles Smith, who wrote the now seldom printed Preface to the Reader and was a final editor; devout Lancelot Andrewes, then the famous Dean of Westminster; Bishops Bancroft, Bilson, Abbot, and others, often deeply involved in seeking preferment; John Overall, Andrew Downes and many other deans and scholars of the classical languages. That a work of such significance to the literary and Biblical world reads swimmingly is rare good fortune. Scholarly considerations aside, Mr. Paine's book will delight any reader and draw out fresh appreciation of the King James Bible as a landmark in English as well as Biblical literature.

(This book is a photocopy reprint)