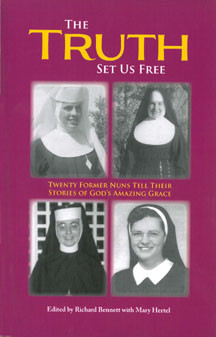 Vatican Council II was completred in 1965.  The Roman Catholic Church appeared to have changed her position towards Biblical believers.  The Council has pronounced that they were now to be seen as "separated brethren" (although it is reaffirmed the Council of Trent, which four hundred years earlier had declared Biblical believers to be heretics).  Catholics could now "dialogue" with them, enter their churches, and go to their Bible studies.

In the more than forty years that have elapsed since then, much confusion has arisen both among Catholics and among Biblical believers as to where each stands today.  This volume brings the steady light of Scripture and the clear testimonies of twenty twentieth-century women to bear on this murky religious confusion of our times.

These women became nuns in Roman Catholic convents as their finest means of serving God.  The testimonies are "inside stories," intensely personal, wonderfully down-to-earth.  They ask - and finally get the right answers to - some of the same questions that you yourself might ask.

The solid promise of Holy God in Scripture is, "And ye shall seek Me, and find Me, when ye search for Me with all your heart."  This volume is modern testimony to that living promise.

The book will be avid interest to:

- dedicated Roman Catholics who often do not know the realities of convent life.

- Evangelicals who are being drawn more closely into "dialogue" with Roman Catholics, unaware of the inner workings of that huge, seemingly mysterious system.