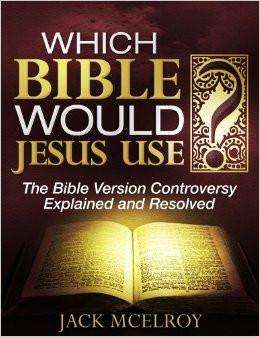 Want to settle the 'Bible Version controversy' once and for all?" You know how people get all upset and sometimes angry when someone talks about one bible version being better than another? It happens a lot in Bible studies because the differences in versions are painfully obvious to all. And because of all the glaring differences and discrepancies in the different Bible versions, the Lord himself is forced to pick just one of them. Everyone's got an opinion as to which Bible is best. The funny thing is that hardly anyone ever considers the opinion of the Lord Jesus Christ. Don't you think he has a preference? Which Bible Would Jesus Use? proves that he does. And you can depend upon him to pick the "right one." Which one would he use? The evidence shows that it's the same brand he's been using for the past 400 years. Once you know for sure which Bible the Lord has already chosen and why, you'll never again have any doubts about "which Bible" is truly God's Bible. And you'll be able to convince others once you've shown them...

• Why the Lord Jesus Christ would never use the ESV because of the known errors (admitted by experts) inserted into the text in Matthew 1:7, 8, & 10.

• Why the Lord wouldn't carry the NASB to church with him because of the known errors (admitted by experts) inserted into the text in John 7:8-10 and because of the way it refers to him in John 1:18.

• Why the Lord couldn't use the NIV, ESV, or the NASB because of the known geography error (admitted by experts) inserted into the text in Luke 4:44.

• Why the Lord can't use the NIV, ESV, or the NASB because of the known error (admitted by experts) inserted into the text in Mark 1:2.

• Why the Lord is hurt by how his character is besmirched in Mark 1:41 in the NIV and would never, ever use it.

• Why the Lord wouldn't bring the NKJV into church with him because of how it undermines the historical integrity of his words in English.