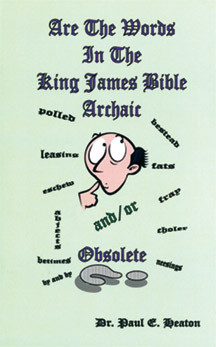 Dr. Heaton critiques What You Should Know About Bible Translations by G. Christian Weiss.  Much-to-do is made over archaic and obsolete words, in relation to the King James Bible, by its critics.  This short treatise does not take every accusation into account, but just enough to let you know that those who make these accusations are full of hot air.

Every new version on the market has archaic and obsolete words in them, but that is overlooked by the scholars.  The reason...Because they are not really attacking the present or past use of these words as they are the words themselves.  It is the Word of God that really bothers them, not the fact that some of them might not be used publicaly or in writing at present.

The second major update, of this booklet, included 15 pages listing over 150 words that are recognized as being archaic, obsolete, rare and so on.  However, one needs only to look at the guide section in the front of most dictionaries to understand that those designations do not mean that such words are "dead," just that they are not commonly used anymore or that their purpose of usage has changed.