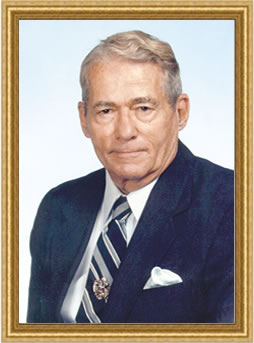 Matthew 25:21
“His lord said unto him, Well done, thou good and faithful servant: thou hast been faithful over a few things, I will make thee ruler over many things: enter thou into the joy of thy lord.”

Peter Sturges Ruckman was born physically on November 19, 1921, to John and Mary Ruckman in Wilmington, Delaware.  At a young age the family moved to Topeka, Kansas, where he grew up while going back to Wilmington during the summertime.  He had a brother, Johnny, and a sister, Marion.  Coming from a long line of military men, he followed in their footsteps by enlisting in the Army and served in World War II as a DI in hand-to-hand combat in the Philippines and spent time in Japan monitoring the radio broadcasts at Radio Tokyo.  But at the age of 27 years old, he enlisted in a different Army.  A Spiritual Army.

On March 14, 1949, Dr. Ruckman signed up in the Lord’s Army by accepting Jesus Christ as his personal Lord and Savior at the radio station in Pensacola, Florida.  He was lead to the Lord by a Baptist preacher, Bro. Hugh Pyle.  At one time he wanted to be a “30-year man” and retire from the Army.  He now has done over two “30-year hitches” in the Lord’s Army, the “right” Army.  Through the 67 years he has served the Lord, his vision and his burden was to reach lost souls for Jesus Christ and to teach people that we have a Bible that is perfect and infallible, that you can hold in your hands – the Authorized King James 1611 Version.  He had a burden especially to reach young men for Christ and get them rooted and grounded in the Word of God so they would be equipped to defend "the Book" against the agnostic scholars who try to rob you of your faith in your King James Bible.  From this desire, Pensacola Bible Institute was started.  It continues today from Dr. Ruckman prayerfully and wisely choosing a man, Brian Donovan, to train and equip to carry on the work of the school and church after he has gone on to Glory.

Dr. Ruckman had pastored for well over 50 years; including a church in Bay Minette, AL, Brent Baptist Church, and Bible Baptist Church in Pensacola since 1973.  He also was the Founder and President of Pensacola Bible Institute which was started in September of 1965.

Dr. Ruckman was a man of many talents.  He was a Preacher, Teacher, Street Preacher, Artist, Writer, played the tuba and the harmonica, had studied the Oriental religions, studied martial arts – Taekwondo and Aikido, and started playing hockey as a goalie at 68 years old with his last game being on his 84th birthday.  He also played racquetball, enjoyed mullet fishing, was an avid reader, liked to garden and had a small “truck farm” as he called it, and was still swimming “laps” with a snorkel at 93.  He had a profound knowledge of the Scripture and its correlation with History.  God gave him a special gift to be able to tie in world events and History to the Bible.

And, then, of course, he dearly loved “kids” and “dogs” (especially German Shepherds!).  He loved to have them running all around the place.  He loved to see them play and laugh.  His special treat was to give the kids gummy bears at each service.  And if he ran out (to moms’ horror), he would give them strawberry Twizzlers – or – chocolate!

One of the things dearest to Dr. Ruckman’s heart was his burden and love for doing the Prison Ministry.  He looked forward to each time he had an opportunity to go into the jails and minister to the men and women there, especially the yearly 2-week long summer “junkets.”  That was his “Christmas.”

Words cannot express the appreciation and gratitude for all the love, support, friendship and prayers of so many saints through all the years; some for many years and some just a few.  Through many dangers, toils, and snares he has already come.  After a fall in 2015 and many months of declining health, he is now at HOME with his Lord and Saviour, Jesus Christ.