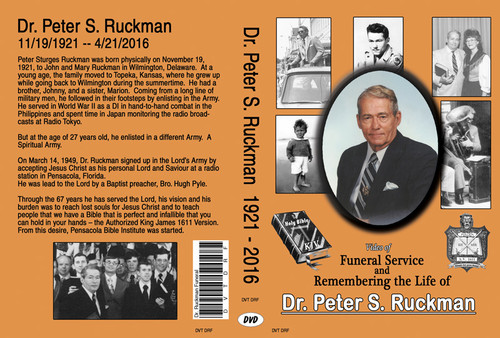 Video of the Funeral and Remembering The Life of Dr. Peter S. Ruckman

Peter Sturges Ruckman was born physically on November 19, 1921 to John and Mary Ruckman in Wilmington, Delaware.  At a young age, the family moved to Topeka, Kansas, where he grew up while going back to Wilmington during the summertime.  He had a brother, Johnny, and a sister, Marion.  Coming from a long line of military men, he followed in their footsteps by enlisting in the Army.  He served in World War II as a DI in hand-to-hand combat in the Philippines and spent time in Japan monitoring the radio broadcasts at Radio Tokyo.

But at the age of 27 years old, he enlisted in a different Army.  A Spiritual Army.

On March 14, 1949, Dr. Ruckman signed up in the Lord's Army by acepting Jesus Christ as his personal Lord and Saviour at a radio station in Pensacola, Florida.  He was lead to the Lord by a Baptist preacher, Brother Hugh Pyle.

Through the 67 years he has served the Lord, his vision and his burden was to reach lost souls for Jesus Christ and to teach people that we have a Bible that is perfect and infallible that you can hold in your hands - the Authorized King James 1611 Version.  From this desire, Pensacola Bible Institute was started.