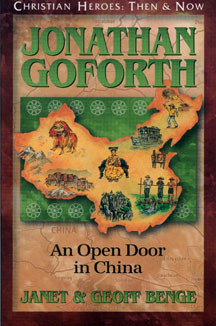 "What would make you come back?" the chinese people asked. "What is so important that you would risk your life to tell us?" Jonathan eagerly explained to them what had brought him back to China, even after so many foreigners had been killed: the need to share the gospel.

As a poor Canadian farm boy, Jonathan Goforth had no idea that he would spend most of his life braving disaster, danger, and disease to share God's love with the people of China. But when God led him to do just that, nothing, not even the violent Boxer Rebellion, would stop Jonathan and his family from answering God's call.

Making their home in China, the Goforths opened their doors to as many as five thousand visitors a month, all of whom heard the gospel message. Their nearly fifty years of service to a nation in need would leave behind a legacy of many thousands of Chinese Christians.