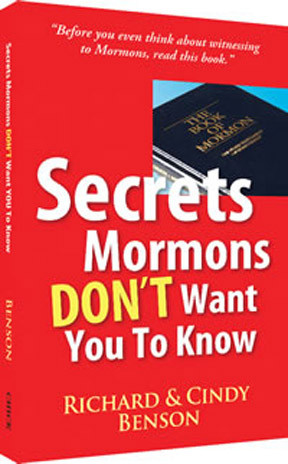 Equip yourselves to reach Mormons

Most Christians only see the “public” face of Mormonism, thanks to their persuasive PR campaigns: clean-faced young people, parents committed to family values, and spectacular temples. But what do Mormons really believe? In this revealing book you'll learn their shocking doctrines, like:

• It's good to lie... to protect the church.
• There are millions of gods.
• God was once a man, and became a god.
• We can become gods, too.
• Jesus and Lucifer were spirit brothers.
• We all have an 'Eternal Mother.'
• God is a polygamist.
• The Jesus of the Bible was a polygamist.
• The Jesus of Christianity is NOT the Jesus of Mormonism.
• Sins are forgiven through good works.
• Salvation by faith in Jesus is 'utter nonsense.'
• Black people were cursed by God.
• A group of gods helped Jesus form the earth.
• Some sins require the shedding of your own blood.

You'll also read the moving testimony of former Mormon, Cindy Benson. She reveals from personal experience the ugly, hidden side of Mormonism. She was only eleven years old when her 53-year-old father announced that a 15-year-old girl must become his second wife. Once you know what Mormons really believe, you will be better equipped to witness to them.