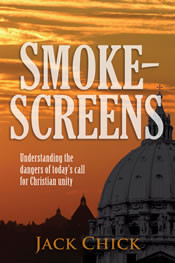 Catholicisms words of reconciliation for Protestants are just smokescreens hiding their true intentions.  Learn the hidden purpose of the ecumenical movement.

Many Christians believe the current call for Christian unity is Biblical and reflects the heart of God.  But in this important book, Jack Chick shows why nothing could be further from the truth.

Before you agree to this "unity," you need to know who you are uniting with...and what they believe.  Here, you will learn that today's "unity" is a clever smokescreen, devised by the Vatican to bring all Christians under Rome's control.  And to be in unity with Rome, you must be willing to compromise your beliefs...and accept hers.

- Discover why this "unity" is so dangerous, and how far down the road of compromise the church has already traveled.

- See how major Christian leaders have been leading their followers into compromise with Rome for years.

- Learn how to spot this dangerous false unity so you can take a stand.

- Learn the high price you will eventually pay for this "unity."