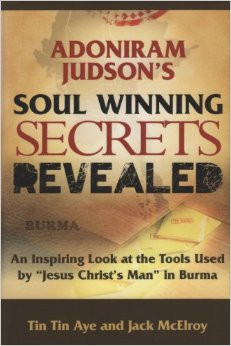 Now you can read and study the arsenal of "soul winning tools" used by "The Father of American Foreign Missions." This is the only book in the world that contains an outstanding collection of the four most prominent tracts Judson used as well as the first translation of Judson's newly discovered 5th tract. Epitome of the Old Testament--The contents of this tract have been hidden from the English speaking world ever since it was written 190 years ago. It contains Judson's hand-picked "Greatest Passages" from The Old Testament, Psalms & Prophets about the coming of the Savior. This is the first English translation made from the only known copy. The Investigator-- This 63 question & answer format tract challenged the Burmans to consider the facts of Buddhism vs. Christianity and choose between them. The Catechism--This was Ann Judson's first soul winning tract. It was so widely used that by 1890 it had gone through 27 editions making 273,000 copies. The Golden Balance--This 1829 tract shows by stark contrast the excellency of Christianity and the deficiency of Buddhism. A View of the Christian Religion--This tract contains Judson's prediction that Christ would return and set up His Kingdom on earth before the year 2016. It sets forth the main teachings of the Bible and what it means to be born again in an amazingly simple way. The Star in the East--This sermon by Rev. Claudius Buchanan led Judson to abandon his home, country and the ease of a more civilized life for chains, prison and torture and the founding of the church in Burma. Adoniram Judson's Spiritual Secrets--Selections of resolutions Judson adopted to "devote" himself to Christ. Including what influenced him most in going to the heathen. Judson's Tract Evangelism--Striking evidence as to why Judson and his team may very well have been some of the greatest tract evangelists America ever produced.