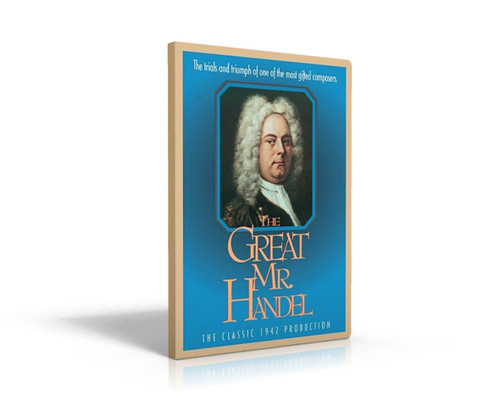 The trials and triumph of one of the most gifted composers.  His gifts were extraordinary.  His life an adventure.  His legacy priceless.

A lavish period drama produced in 1942 by Lord Rank's G.H.W. Productions, Ltd.  This was the first color film shot with "character lighting" instead of the flat overall lighting hitherto demanded by Technicolor.

This story deals with the later stages of Handel's life, leading up to the composing of his masterpiece "Messiah." During his early years in London, Handel had enjoyed the King's patronage and people flocked to the theatres to see his operas.  But soon fashionable society turned against him.  Plagued by financial worries and ill health and abandoned by almost everyone except those closest to him, Handel shut himself away and worked day and night on "Messiah."  Its performace a tthe royal Opera House in 1743 resulted in a standing ovation led by the King.  It began a tradition and fitting honor for the incomparable Handel, composer of one of the finest oratories in the English Language.